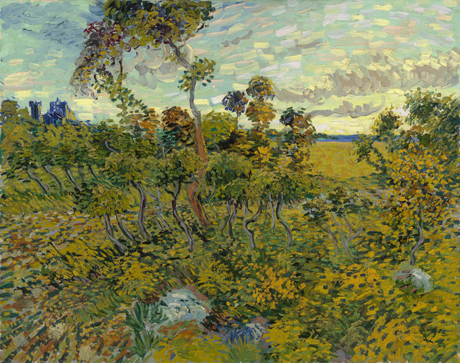 Left in an attic and missing for decades, the long-lost Vincent van Gogh painting – “Sunset at Montmajour” – was authenticated by the Van Gogh Museum in Amsterdam in September. After a two-year investigation, art historians and researchers identified the work with pinpoint precision, in part, thanks to a technique based on a canvas “weave-map” developed in a Cornell-initiated project.

“Studying the paintings of van Gogh presents a wide range of engineering problems,” said Rick Johnson, Cornell professor of engineering, who holds a Ph.D. in engineering with a Ph.D. minor in art history. He helped to develop computer algorithms to examine painting X-rays and to count and map the number of individual threads per centimeter in painting canvases. “Like other painters, van Gogh purchased canvas by the roll, and the 19th-century looms created unique canvas patterns, and these patterns really jump out at you from our color-coded weave maps.”

Louis van Tilborgh, Teio Meedendorp and Oda van Maanen, researchers at the Van Gogh Museum, confirmed “Sunset at Montmajour” based on evidence of van Gogh’s style, technique, his personal letters, the provenance of his other works and the canvas weave.

From van Gogh’s letters, researchers determined that he painted “Sunset at Montmajour” on July 4, 1888, in Arles, France. Using X-ray image analysis techniques developed by Cornell’s Rick Johnson and Don Johnson at Rice University, the museum researchers determined the painting belonged to the same canvas roll as the comparable work – “The Rocks” – which the artist created that summer in Arles. “The Rocks” currently resides at the Houston Museum of Fine Arts.

The so-called canvas weave maps plot the average thread count of either horizontally or vertically oriented threads, represented by colors on a computer. Matching weave patterns allows researchers to deduce whether paintings came from the same roll of canvas.

Originally, after van Gogh’s death, “Sunset” was owned by the artist’s brother, Theo van Gogh, and sold about a decade later. Ownership records were lost. A Norwegian industrialist bought it but was later told the painting was fake. The allegedly bogus painting was dispatched to an attic and in 1970, “Sunset at Montmajour” was found in that attic.

Complete detail of the authentication process was published in the October 2013 edition of the art history journal Burlington Magazine.