It's billed as the world's first fully painted feature film. The film—billed as the world’s first fully painted feature film— aims to tell the story of the tortured Dutch artist’s life. Every one of the 65,000 frames of the film is hand painted by 125 professional oil-painters who traveled from all over Europe to the Loving Vincent film studios in Poland and Greece to create works for the film. An official release date has not been set, but the filmmakers have launched a competition, ending January 31, whereby anyone who signs up for the film’s newsletter is entered for a chance to win one of the paintings created for the film (above). 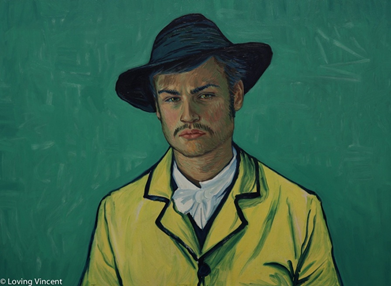 Loving Vincent was first shot as a live action film with actors, and then artists went in to paint, frame-by-frame, in oil. The mesmerizing visual result melds the modern day actors with the historic artist’s iconic portraits and landscapes. Among the famous actors who have roles are Saoirse Ronan, who starred in the film Brooklyn, and Chris O’Dowd, of Bridesmaids and Saint Vincent, as well as Helen McCrory, of Harry Potter fame.

Interest in the artist and his dramatic, albeit short life,has never been more intense. This past year saw the publication of Breaking Van Gogh, in which journalist James Ottar Grundvig posits that a painting in the Metropolitan Museum of Art, Wheat Field With Cypresses, is a skillfully rendered fake. More recently, an intense debate developed around publication of The Lost Sketchbook of Arles, in which scholar Bogomila Welsh-Ocharov put forth a detailed case for why she believes a sketchbook contains drawings that van Gogh created while in the South of France, near the end of his life.

Experts at the Van Gogh Museum in Amsterdam have publicly disavowed the work, prompting the French publisher to threaten legal action.

According to a release from the filmmakers, they decided to “let the paintings tell the real story of Vincent van Gogh.”