Full article on the web: 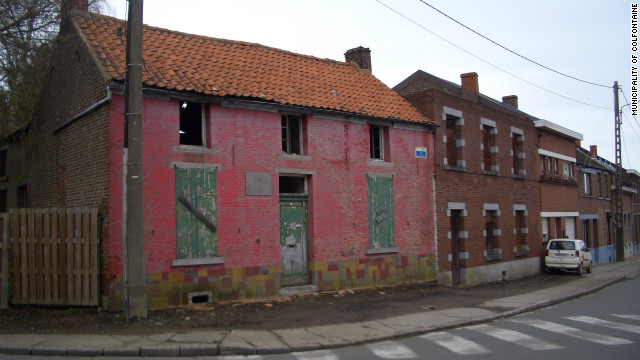 London (CNN) -- Its windows are boarded up, the red-painted exterior is peeling and the roof could do with re-tiling -- but this derelict house in a village in the Borinage region of Belgium was once the home of Dutch artist Vincent van Gogh.

The house and surrounding industrial area, in the village of Petit Wasmes, might not look too impressive, but it was here that Van Gogh decided to become an artist.

Now local authorities have agreed a deal with the owner of the house to rent it for 27 years, with the aim of turning it into a museum and possibly a guest-house, in time for the city's partnership with neighboring Mons, the European Capital of Culture in 2015.

An exhibition covering Van Gogh's time in the region is planned for the Mons Museum of Fine Arts, while a documentary exploring the artist's life as an evangelical preacher among the mining community there is also in the works, with the house sure to feature.

"There is [currently] no one living in the house," said Gregory Dufert, a spokesperson for the municipality of Colfontaine. "You have four walls, you have something that looks like a roof and that's it."

The municipality plans to fully restore the house, so that it will eventually look as it did when Van Gogh lived there.

We are a very poor region and it's really amazing to know that someone as celebrated as Vincent Van Gogh stayed there
Gregory Dufert, spokesperson, the Municipality of Colfontaine

It is an important cultural resource to the local area, said Dufert.

"We are a very poor region and it's really amazing to know that someone as celebrated as Vincent van Gogh stayed there," he said.

According to Teio Meedendorp, an expert on Van Gogh at the Van Gogh Museum in Amsterdam, local people in the Borinage still "have a lot of sympathy for Vincent himself, because he had an eye for their needs and troubles."

Van Gogh's humanistic side was developed during this time and he even tried to endure the same hardships as the impoverished miners, said Meedendorp.

But it was when he was discharged from his job as a preacher that he made the decision, on the advice of his brother, to become an artist.

"It was a struggle to make this decision and he had to work really hard, which is what he did -- he drew hundreds and hundreds of drawings before he saw himself fit to be an artist," said Meedendorp.

Few of these early sketches survive, but a drawing entitled "Mine workers in the snow" from 1880 and in the collection at the Kroller-Muller Museum in Otterlo, the Netherlands, depicts workers trudging towards a mine which looms darkly in the background.

In a letter to his brother in 1880, Van Gogh said of the drawing: "I have made a hasty scribble of miners and haulers (both boys and girls) going to the shaft in the morning through the snow, by a path along a thorn hedge; passing shadows, dimly visible in the twilight."

According to Meedendorp, there is very little evidence left of Van Gogh's time in the Borinage, which is why the house is so important.

The area, too, is changing rapidly, with the mining industry now almost completely gone.

"I have a lot of sympathy for that region," said Meedendorp.

"From the tourist point of view [the house] would help the region get some attention," he said.

Van Gogh lovers will hopefully be able to visit the restored house in 2015.

And for those who can't wait, an exhibition entitled "Van Gogh Up Close" opens at the Philadelphia Museum of Art in February, while the Van Gogh Museum in Amsterdam is currently focusing on Van Gogh's studio practice.